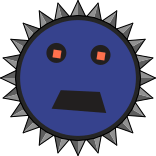 Blue Bots are NPC enemies that are only found in the PvP zone "Sparrow" and can be destroyed by turrets, the larger the Blue Bot is the more HP it will have and the more loot they will drop. It is more dangerous than the Red Bots. They deal damage just by touching you. However, they drop better loot.

They are flying blue circles with red eyes and have spikes all over them spinning around them.

Retrieved from "https://drednotio.fandom.com/wiki/Blue_Bot?oldid=2966"
Community content is available under CC-BY-SA unless otherwise noted.